Last week a girl named Ursula came to my office. She looked angry, frightened and disappointed. She was angry because she was harassed for rescuing a suffering dog. She was frightened because Mumbai Crime Branch Police was after her and she was disappointed because she and her aged parents were suffering for no fault of their. She had rescued and adopted a mix breed dog which was discarded by a Parsi family. The dog was given away to their maid but since she couldn't afford to keep this dog, she approached Ursula as she lives in the same area. Ursula, an MBA from Harvard University, is a busy person taking care of her father's business but a hard core animal lover. She didn't want to take the responsibility of the dog but the maid was so insistent that she agreed to look after the dog temporally and then give it away for a good adoption. The dog Tagya was a problematic dog. He was mistreated by his family and was always tied up. Nobody showed him any affection and was seriously deprived of love. He had become aggressive and used to bite. He kept on bark insanely and used to urinate all over the house out of frustration. Ursula stopped going to office for few days. Then she made her driver sit with Tagya and traveled by taxi. She desperately looked for adoption for Tagya because her aged parents and neighbors were getting disturbed with this problematic dog.

Some how she found an adoption in Borivali. The new Guardian wanted her to deliver the dog to their residence. She didn't mind doing so since Tagya was getting a good home. The next day she took the dog from South Mumbai to Tagya's new home in Borivali and heaved a sigh of relief. But deep down there was an emptiness which creped in her heart. She was suddenly feeling lonely and dejected. As soon as she reached home she got an angry call from the new guardian saying that the dog had bitten a family member and it was not possible for them to keep him. They were so upset that they warned her that if she did not take the dog away immediately they would abandon it on the road. Ursula had no choice but to go to Borivali and bring Tagya back. As Tagya saw her, he jumped on her lap like a child who found his mother. Ursula was happy that Tagya was back again but fearful of the reception he would get back home as he was considered an unwanted and troublesome dog. Suddenly a bright idea struck her. She decided to adopt the dog and vowed to make him make him healthy and happy. Immediately she applied for a BMC license and made Tagya her little boy. She spent maximum time with him and brought two more pups for Tagya's company. With the love and affection Tagya stopped getting aggressive and was becoming tame. His barking reduced and his biting stopped. He started greeting Ursula by jumping affectionately on her when she returned home from office. Ursula's love and care transformed the aggressive dog into a friendly, a happy and loving pet.

One fine day Ursula got a surprise call from the previous owner asking for the dog back and naturally she flatly refused. Now Tagya was hers and she could not part with him. The calls become more terrorizing with some anti social elements threatening her to return Tagya back.

But she was unmoved. Previous owner took up the matter with BSPCA who asked Ursula to return the dog back. She gave her whole life to reform Tagya and could never send him back to the same hell. When the previous owners saw that nothing was working out they filed a false complain against Ursula with the Crime Branch Police for stealing the dog. Now Ursula was upset and panicky, but still stood at her ground. She called up PETA and they gave her my number and we had a meeting in my office. I assured her that I would try my best to help her out. The whole night I was thinking how to save this poor dog from the clutches of cruel owner. I prayed to God to help me to help that girl. And all of sudden I got the solution. I went with Ursula to the Crime Branch Officer and the concerned officer was highly impressed with my ID cards of AWBI & High Court Committee and gave us a patient hearing. I told him that I was a witness to entire episode and was aware that this dog was discarded very ruthlessly by his family and Ursula has officially adopted this dog through my organization and she is a legal owner of this dog. I then bowled him with my googly. I said that I would like to register a counter Police complain under the PCA Act against the previous owners for being cruel to the dog, and discarding him without any valid reason. (I had taken animal laws book with me to convince him with animal laws). I also warned him that since she is having official dog license it is BMC jurisdiction to decide who the owner is. Now the Police Officer was confused. He thought he is getting into what is none of his business. Finally he requested us that not to file any counter police complain and promised us that he will call the previous owner and will warn him not to harass Ursula and forget about the dog other wise he has to face the litigation for being cruel to his dog and dumping him at the mercy of his poor maid.

So finally we both souls happily came out from the Crime Branch Office. On the way Ursula treated me with my favorite strawberry ice cream and didn't stop praising me. Next day again she arrived in my office my heart skipped the beating. I thought oh my God Police must have decided to take away Tagya from her. She quietly sat opposite my chair and slowly handed me an envelope. Inquisitively I open the cover and I found a cheque of 11000 rupees in the name of IDA. She just spoke softly this is to say on behalf of Tagya "Thank you very much for saving my life". 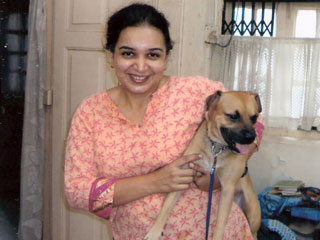