On New Years eve I got a very precious gift in the form of two old working bullocks RAM & LAKHAN. Ram is a smaller brown bullock and Lakhan is bigger with white and black shaded and long horns.

Ram who is very old developed a chronic wound on his shoulder due to constant rubbing of the wooden log which they carried on their shoulders. In this condition his owner used to drag him from Kurla to Navi Mumbai every day. If Ram refused to walk he used to get inhumane treatment from the drunkard guardian.

Lakhan has developed Arthritis and could not walk. Every day these two bullocks used to get beaten up with a nailed danda by their guardian and his men. They worked for him for nearly more then ten years.

Finally the guardian decided to get rid of them by selling them to a butcher (as per their tradition). Shenaz (my staff member) gave me this information. I contacted the guardian and asked him to sell those bullocks to me instead of giving them to the butcher. The guardian had his own logic, he said "Madam these bullocks have worked for me for ten years and now in the end I would like to make them useful for others. By giving them for slaughter. Poor people will enjoy the meat, skin will be used for making leather goods and bones will be use in medicine and fertilizer and I will be getting good money which will support me to buy other bullock. By giving them to you I am not doing my duty towards my fellow brothers". I was stunned to hear his twisted logic. I tried my best to convince him. I told him that God will be more happy if you give these bullocks a chance to live peacefully in their old age. But all my requests were going above his head.

Finally I used the last weapon left to me. I told him "I will pay you 1000 rupees more then the butcher." Sarcastically he said he will think over it and will tell me the next day. For me it was a long sleepless night. My heart was sinking I thought this time I will loose these bullocks. I kept my finger crossed Prayed hard to God To save his helpless old bacchas. Morning I could not wait for his call. With sinking heart and trembling fingers I called him. He was still sleeping. He got little irritated but gave me lease of life by saying "theek hai madam jab aap itni binti kar rahi ho to le jao magar aise pehle lunga aur bailo ko phir haath lagana." My heart started dancing with joy. It was a morning of 1st January 2010. A beautiful new year gift to me.

Immediately I and Shenaz rushed to Kurla. I didn't want to take a chance. The drunkard guardian could change his mind any time. I pushed the money into his hand without giving him a chance to think or talk. I loaded both the bullocks in our IDA van for their final journey to my farm and freedom. I saw both the bullocks staring at me from the window. I felt that my grand parents are showering their blessings on me on the 1st morning of 2010. A LUCKY BEGINNING OF YEAR FOR ME. 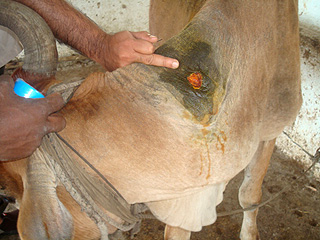