In August a rainy morning I got a call from Kalyan a far suburb of Mumbai that a big stray bullock is having problem in his leg and finding it difficult to walk. I sent our Dr. Amit Sharma to treat him. Amit's verdict was that this is caused by an accident and he needs proper treatment and rest. I took him to my farm to shelter him, so that he need not roam around for the rest of his life in search of food. It was the most difficult task of my life to get the bull into the ambulance. Dr. Amit gave him sedative but it never worked. Around thirty people pushed him into the ambulance and he headed to his new destination fuming with anger and anxiety. "I wish there was some way to convey to these helpless animals that we are their friends"

At the farm he was not ready to accept the change. Everybody was scared to get near to him. His hot temperament made me name him TOOFAAN. Having eaten from garbage all these years, green grass and other cattle food was not up to his liking. All our efforts to tempt him with goodies failed.

Gradually he started showing strange symptoms - some brown color liquid started oozing out from his nose. Vet opined that there could be lot of plastic accumulated in his stomach. He was weak but still angry. Tried several medicine but he gave up. One day we found him very tired and weak and sitting quietly. After that he did not stand at all. I met him on Dassera day put garland in his neck gave him some jalebies which he ate, spent lot of time consoling him, convincing him that he is in safe place and we all want him to live here happily, that we all love him very much. In between he nodded his head when I talked to him. Now he had slightly mellowed down. I developed great hope that he will now get adjusted in farm but my heart was sinking with some unknown fear. With heavy heart I left my farm with prayers to see this majestic bull again in action.

That night I was thinking only of Toofan. Next morning at 7 my farm care taker called me and said he is sitting with head hanging down. He called the vet. After an hour again he called me. I was hoping to hear him say that he is better instead he informed me in cracked voice "TOOFAAN CHALA GAYA" (Toofaan has gone)

We gave tearful burial to Toofaan in the farm. Asked him to pardon us if we had made him miserable and angry by bringing him in my farm.I was wondering why I couldn't convince him to live. Why this big baby gave up so easily? I think I will never get these answers but I have decided when I will meet him in other world very first I am going to ask him the same question and I am sure he will reply me. 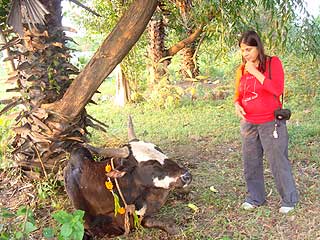