On 26/11, we got a desperate call from a visitor to In-Orbit Mall, Vashi. Apparently, the dog in the picture had got its head stuck in a plastic jar left on the pavement by unconcerned citizen! In his desperation to get his head out, and due to his panic, he went into the gutter from the outlet on the curb. On hearing his yelps, some persons pulled up the cover on the gutter and the Fire brigade was called for the rescue. They tried for some time to cajole the poor guy out, but he would come out and then rush underneath again. They gave up and walked away....... We came in at this point.

Our staff tried to get him out with a grasper, but he was so desperate that they worried that he would get strangled to death, so our staff member Mr. Vikas decided to get in instead! Without a thought, and without knowing what was inside that horrid gutter, he squeezed inside and slithered literally inside to be with the dog. It took him more than 15 minutes to just squeeze in where you see him in the second picture. Then two grabbed the grasper and pulled and he pushed the fellow from behind, and he was out!! First they punctured big holes in the jar with a screwdriver, so that he could breathe easy, next they got a cutter from somewhere and cut him out of it. All staff was needed to hold him down so that he doesn't get injured due to the cutter.

He was finally out! He jumped around in a tizzy, and all the dogs of the locality, who were howling around during this whole drama, ran and jumped around him and finally, they ran away joyfully!

This again highlights the dangers not only to us but to all living things of garbage carelessly thrown across the city. If we are not careful someday the platic will end up choking us just like this poor dog. 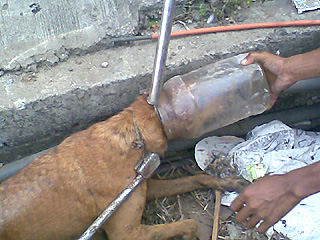 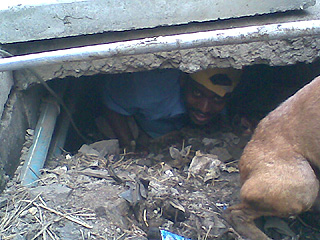