The ceremony was hosted by popular Marati actor, Shri. Pushkar Shotri. A brief presentation about IDA India's work, followed by role-plays on animal welfare by little children were aimed at creating awareness among the present Navi Mumbaities. Mrs. Fizza Shah, President-IDA India, also expressed the long-cherished dream of IDA India - an animal hospital in Navi Mumbai. The NGO hopes to get support from its well-wishers for this cause, particularly for a suitable plot of land in this region.

Navi Mumbai has a large population of animals. The most neglected of them are the large number of abandoned cattle who are found wandering the streets, especially areas like Kharghar, New Panvel, Panvel and on the main road going to JNPT. IDA India has experienced great difficulty in loading these animals onto the existing Navi Mumbai ambulance; to lift an injured buffalo at least 15-20 persons are required and the loading action is extremely stressful to the injured animal. Whenever possible, the IDA India ambulance with a hydraulic lift from the Mumbai region is called for, but this delays the aid to the animal. The new ambulance, is unique and a first of its kind as it has not only a hydraulic lift but also a trolley which can be taken out of the van and pulled to the place where the animal is lying. The animal is loaded on the trolley, which is comparatively easier than putting it on a lift, and then taken to, and slid on the lift. This was designed by members of IDA and custom made by Randhawa builders of nerul, to take care of the drawback of a large animal ambulance which is that it cannot go to many places due to its size. This ambulance has fulfilled an urgent need and henceforth will bring relief to the animals in the region. 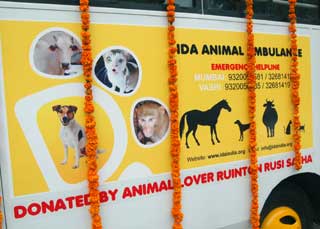 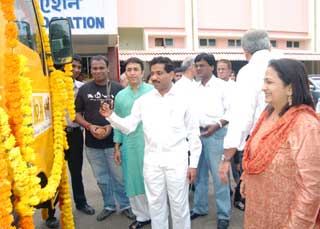