On the 27th February our doggies, cats, pups and kittens were in for a treat. Thirty young employees of Accenture streamed into the Centre on a visit. They were met by Dr. Guruprasad and our employees, Selvi, Aparna and Preeti, who welcomed them and proceeded to take them on a guided tour of the premises.

They were shown the OPD, the kitchen area where a vast amount of food is prepared every day, the injured dog section, where there happened to be a mother with her five pups. The young people enjoyed interacting with these latter five. Then they were shown the large maggot wound wards and were very interested in finding out about the treatment given, how these dogs were re-habilitated and so on. The adjacent blind dog ward proved to be a magnet, the dogs are very affectionate and enjoyed all the petting and attention.

Next was a visit to the Cat Ward - needless to say, our cool cats were quite a hit and the small kittens proved irresistable. But best of all, the young people loved the puppy pen. Pups love nothing better than to frisk and play and the visitors were so taken with them, that three pups were adopted that morning, one young couple taking two of the little ones together. Two other girls were inspired enough to sign up to be IDA volunteers.

All of the young people offered to think of some way to help with the problematic areas within the Centre (drainage for instance, is a big problem). They were also thoughtful enough to bring along with them a substantial amount of rice, dhal and dog food and also promised to collect and donate old newspapers - useful at the Centre in so many ways.

The pictures tell the whole story. This was one encounter which was thoroughly enjoyed by all - the visitors and the visited! 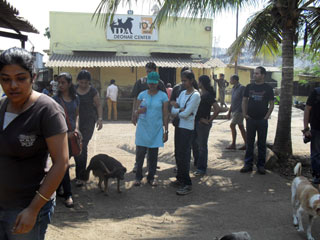 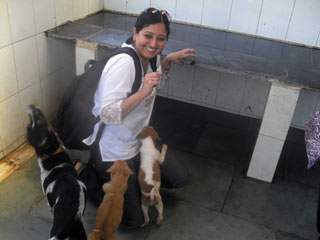